Kobe Bryant continues to get portrayed in the media and by fans as a selfish, high volume shooter who refuses to trust his teammates. Such things have been said as Kobe having tunnel vision and only caring about his statistical achievements. Some say that he only cares about his legacy and catching Michael Jordan as the greatest of all time.

This couldn’t be further from the truth.

People seem to ignore the fact that Kobe has always averaged around 5 assists per game each season, which ranks at the top of the league every year for shooting guards. This year he is 3rd in the league in assists for shooting guards, only behind James Harden of the Houston Rockets and Monte Ellis of the Milwaukee Bucks.

They forget that in his career (not including his first 3 seasons where his role was limited) he has never averaged less than 4.5 assist per game and has averaged as many as 6 per game. Even in those years when he lined up next to Luke Walton, Smush Parker and Kwame Brown, when nobody could blame him (even though many did) for taking a ton of shots, he found a way to average 4 and half assist per game.

Keep in mind that assists are only counted when the player receiving the pass actually puts the ball in the basket. Assists do not count when that player misses the shot, turns it over or gets fouled. Kobe averaging 5 assist per game means that there were at least 7 and as many as 15 assists opportunities that were blown by the recipient of Kobe’s pass.

Kobe is coming off 3 straight games of double digit assists; in two of those games he compiled 14 assists which is 1 short of his career high. The Lakers have won all 3 games and suddenly looked like a harmonious bunch on offense and energized on defense.

Because of the way the media incorrectly portrays Kobe as an unwilling passer that does not trust his teammates, it shocks many to hear that Kobe has strung together a few games of double digit assists. What will surprise many is that these stretches of generosity are not uncommon for Kobe. In fact if you’ve been following Kobe’s career and not been brainwashed by the media’s portrayal of Kobe being a selfish player you already know the truth.

Lets take a look a back in Kobe’s history:

Kobe has had 81 games of double digit assists, including the playoffs.

Here is a break down of Kobe’s 81 double digit assists games, which include the playoffs:

Here is a break down of Kobe’s streaks of consecutive games with double digit assists:

Back to back games of double digit assists: 12 times

Here is a snap shot of some of Kobe best string of games where he dished out double figure assists: 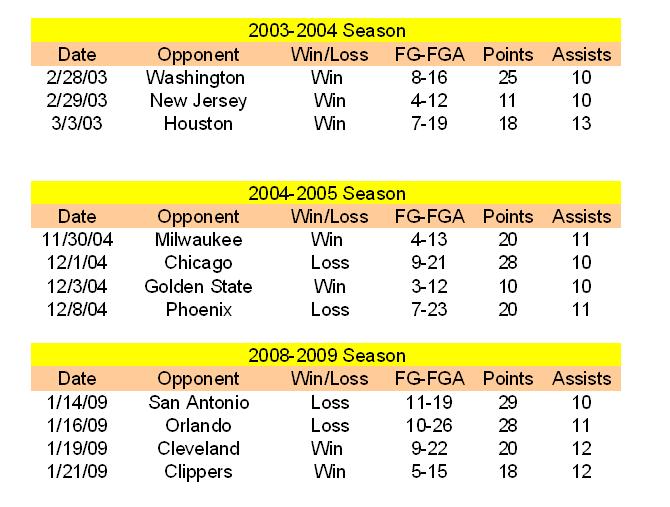 Over the course of Kobe’s career, the formula for success has proven to be Kobe being the go for the throat, relentless scorer that he has always been.

At times, Kobe’s uper competitive spirit and history of success of him playing as an agressive offensive weapon does go too far with him trying to do it all himself on the offensive end. Its not that Kobe doesn’t trust his teammates, it’s just that he trusts himself a whole lot more.

But make no mistake, Kobe is, always was and will continue to be, all about winning; no matter how it’s done. As I have illistrated, Kobe has been a willing and able facilitator when it was necessary. If that is needed to win with this current squad, he’ll do that, as he has been doing. That can change as the season goes on.

Kobe summed that thought up pretty well in one of his recent tweets:

Whatever it takes. 14 assist. 10 reb or 40 points. Gotta get it done by any means necessary #countonnoexcuses

8 thoughts on “Contrary to Popular Belief, Kobe Has Always Been a Willing Facilitator”