I was driving to pick up my daughter last night after work when I heard a few segments of some late night sports talk radio show on 710 ESPN. The host, J from Compton, led the discourse of tying the Lakers current woes to Kobe Bryant’s shot selection and volume. He mentioned other problems as well but the discussion was dominated by Kobe’s offense. It’s a tired topic that routinely resurfaces anytime a Kobe led Lakers team begins to struggle.

The continued disrespect and utter lack of appreciation of what Kobe brings is mind-boggling. Scratch that, its mind blowing, and in the bad and gory way, not the good mind blowing.

Kobe Bryant is, was and will always be a go for the throat, relentless, unconscionable, aggressive scoring machine.

It’s who he was when he lined up next to Shaq during their reign on top of the NBA in the early 2000s.

It’s who he was in the down years after the upheaval when Shaq was traded and he called guys like Smush, Kwame and Walton as teammates. Ugh.

The same Kobe was launching shot after shot (many bad shots) in the 2 most recent championships with his new #2 guy Pau Gasol.

It’s who Kobe is now.

The Lakers have been great because of what Kobe has brought offensively; they’ve taken the immense good with the occasional bad.

But J from Compton and those in the Kobe shoots too much camp say it’s a problem NOW.

I thought I’d put my 2 cents in the conversation via Twitter and got into a little exchange with @Jfromcompton:

@JfromCompton Kobe isnt doing anything different now than what he did when he was winning chips. Look at this data: http://t.co/tz8ybS6k

I referenced my piece on the last 22 years of NBA champions that in most cases included a dominant offensive player that took close to or more that Kobe’s current shot output. The point being a high volume shooter is the norm on a championship team and never seemed to derail a championship team before, including those with Kobe on the team.

There is no doubt that the Lakers are struggling. They are currently 17-22 and 11th in the Western Conference. If the season started today, the Lakers would miss the playoffs for the first time since 2005. The Lakers performance this season is completely inexcusable considering the level of talent that they acquired in the off-season.

But how is it that Kobe Bryant’s offense, which has been simply incredible this season, is being singled out as part of the Lakers’ problems? How is it that J from Compton and those with his same line of thinking keep pointing their finger in the wrong direction?

Here are the Lakers current offensive team stats with their NBA rank in parenthesis:

Lets take a look at the Lakers defensive team stats:

Here are a few other problem areas for the Lakers:

The Lakers have a litany of problems and as you can see from above, they are all on the defensive end. Yet, J from Compton and others want to talk about Kobe’s offense? Its analogous to your doctor recommending a rectal exam when your complaint was a toothache. 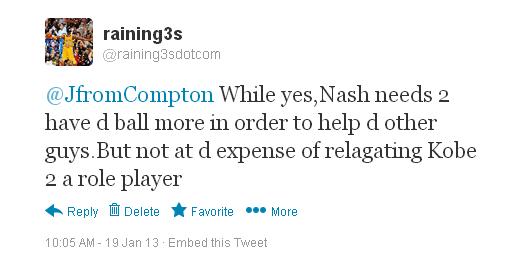 Despite J from Compton’s insistence, the team isn’t being hurt offensively, so the discourse relating the Lakers current problems should not involve Kobe’ offense or any other offensive facet of the game. As I have clearly shown, it is the Lakers defense where all the problems are centered. 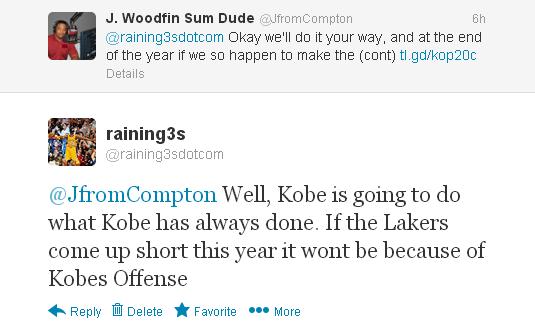 If the Lakers are able right the ship and at least make a serious run at an NBA title, Kobe’s play on the offensive end will not have changed from what we are seeing now. Its going to be same old Kobe. The changes will be with the many other problem areas of the Lakers.

However, reality is, if the Lakers are unable to veer the direction of their season out of the current path of unmitigated disaster, the blame will most certainly fall on the lap of Kobe Bryant; fair or not; right or wrong.