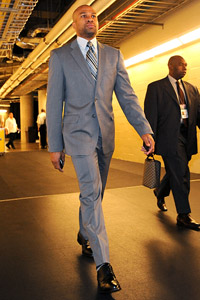 With the sudden firing of Mike Brown by Lakers management after a disappointing 1 and 4 start to the season the search of the next Lakers head coach begins.

Some of the many reasons that led to Mike Brown’s demise were a lack of creditability, respect from the players and inability to inspire or instill confidence. While we have all heard the amount of basketball knowledge that Mike Brown possesses and his incredible work ethic, those things just don’t register with NBA players as much as a resume filled with results as either a player and/or coach.

How is a team that has a combined 8 championship rings, 3 MVPs, 6 all stars and a payroll exceeding 100 million going to feel confidence getting direction from a coach who was fired from his last head coaching job for his inability to led a team to a championship and never played the game at the NBA level.

We saw the answer both this season and last; with complete and utter listlessness that resulted in a winless pre season and 1-4 start to this season.

The talent of this team is immense at the top: Kobe Bryant, Dwight Howard, Steve Nash and Pau Gasol. You stack up those 4 to any other 4 on any other team in the league and the Lakers have a tremendous advantage. This team should be able to win convincible with minimal coaching. A minimalist and simplistic coaching style is the polar opposite of what Mike Brown was and what I believe this team needs. Hence, the Derek Fisher as head coach suggestion who has minimal, well zero actually, head coaching experience.

What Derek Fisher brings to the table immediately and what Mike Brown lacked, is respect and creditability that comes with being a former NBA player and champion in the league.

Derek Fisher knows what it takes to win because he has won. He won rings with Kobe, Gasol and Metta; who better to know what ways to get the most out of them.

While he might not have head coaching experience, he has always been known to be a coach on the floor; giving directions, praise and feedback to other players. He’d be doing the same thing now expect with a Georgio Armani suit on the sidelines.

When Derek Fisher talks, players listen. It was Derek Fisher that orchestrated the players’ only meeting last year when the Lakers were struggling and had to air their frustrations about the unclear roles on the team and rotations of Mike Brown.

It was Derek Fisher that gave the motivational speech before first game of the second round match up against the Oklahoma City Thunder in the 2010 playoffs that led a Lakers beat writer to marvel at his leadership and respect he commanded from the other players.

Derek also has experience with leading players in something that affects their most prized possession, their money and livelihood, as the president of the NBA Players Association.

Derek Fisher being a player he knows that he needs to allow players to make decisions on the court without the constant pulling of strings on every aspect of the game as Mike Brown did.

I can see Derek Fisher being more of a figure head that is there to manage personalities and inspire, leaving the day to day coaching duties to an experienced assistant coaching staff. A role very similar to Larry Bird when he was coaching the Indiana Pacers and Rick Carlisle essentially ran the team.

The suggestion of the Lakers handing the head coaching job to Derek Fisher is a reach because of the fear of the unknown with a team that has such a small window to win with this core of players. The Lakers brass will want more certainties then questions marks with the next coach. However, there is also something to fear with what we do know of the available coaches presently available.