A 1 and 4 start is not what Lakers’ fans were expecting when the Lakers formed the West Coast version of the Superteam this off-season, but that is what they got so far.

The Lakers again looked completely out of whack defensively and unconformable on the offense end last night on their way to a 95 to 86 loss in SaltLake.

The growing pains of implementing a new offense has been criticized going into last night’s game, but in terms of production and efficiency, the offense hasn’t been the problem; that was until last night. The Lakers shot horribly from all areas: 33% from the field, 17% from 3s and 69% from the free throw line.

Kobe Bryant got it going late in the game by scoring 16 of his 29 points the 4th quarter, but it was a little too late as the Lakers had already dug a hole too big to over come.

A sign that Dwight Howard is still not close to being 100% is that he has yet to establish his normal dominance in the paint defensively and with the boards. Dwight Howard had just 9 rebounds and the Jazz won the points in the paint battle last night, 44 to 36. Dwight is averaging just below 10 rebounds per game in 5 games this season after averaging over 14 boards per game each of the last 2 seasons and 13 per game for his career.

Frustration is understandably setting in. “We’re all frustrated. I’m very frustrated too with the simple fact that I just didn’t think we played the game like we talked about going into the game. We wanted to be the ones to hit first. We wanted to be the ones to play through their physicality and I thought we didn’t.” Mike Brown stated after the game.

The Lakers will have 1 day off to shake off the loss before they host the Warriors at Staples on Friday. 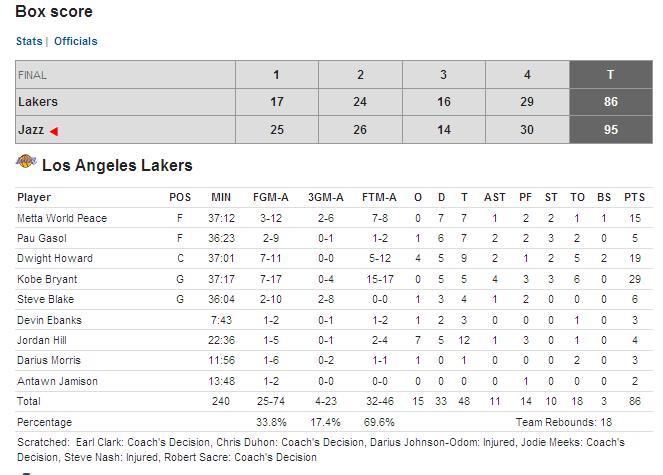