The perception is that the cost of attending a Lakers game  requires the average fan to go to absurd lengths to acquire the necessary disposable income to pay for tickets, such as acquiring a 2nd mortgage on their home or renting out their womb. This perception has been a reality for some time with the Lakers experiencing great success over the years and showcasing attractive superstar talents like, Magic Johnson, Shaquille O’ Neal, Kobe Bryant and even last year with the 1 year rental of Dwight Howard. Los Angeles loves winners and Stars and the Lakers have provided an abundance of both; therefore, fans flocked and prices soared beyond the everyday fan’s budget.

If you strictly go by retail value (also known as face value), Lakers tickets are still one of the highest priced in the league and very much out of the price range of the common middle income family or your average individual earning around 40,000 per year.  Based on a report I found from Business Insider, the Lakers average ticket price for a regular season game checked in at $100.25 (2012-13 season) which ranked 2nd only to the New York Knicks.

If you are looking to just get in the building for a Lakers game, $100 will do it per ticket, but you aren’t sitting in great seats with a good view of the game. Using the listed price range from Ticketmaster.com for a Lakers game, the only ticket at retail price that you can get for $100 is in the concourse level (300 seats) and a few  in the loge section that is located below concourse, but behind the baskets. Anything in the lower level or premier section is over $100 per ticket; the great seats are well over $100 per ticket.

Everything has changed this season with the Lakers nearing the bottom of the standings and their only marketable star, Kobe Bryant, being out and only appearing in 6 games due to injury. Lakers aren’t winning and don’t have a star to keep the attention of those casual fans with deep pockets and loads of disposable income. Those causal fans with money to burn are now starting to lose interest and finding other means of entertainment.

The waning interest from this affluent segment doesn’t affect the retail prices of the tickets since those are established well before the season begins. It is in the secondary market that’s being rocked by the downturn. Tickets that were purchased in droves by companies looking to resell them for profit in the secondary market are now finding them difficult to move. There is now a surplus of inventory causing Lakers tickets prices to crash as a result of  simple supply and demand.

What does this mean? That while all those secondary ticket agencies and even Lakers’ season ticket  holders lose, the regular fan wins. The regular fan is now able to attend a Lakers game at a reasonable price.

To illustrate the significant value now available to all Lakers’ fans, I’ll provide my purchase of tickets for last night’s Lakers’ game against the Utah Jazz as an example.

I knew that finding great seats at prices significantly less than retail price would be no problem with the Lakers playing one of the worse teams in the league in the Utah Jazz and it being a Tuesday night. You want to perform your search on game day since the closer you get to game time the faster that desperation sets in for these ticket holders not wanting to get stuck with tickets they aren’t planning to use.

Sites that I usually use to purchase tickets are Ebay, Stubhub and Craigslist. Prices are all pretty inline on all 3 sites so I will just provide information for Stubhub since this is where I ended up purchasing my tickets.

I set the maximum price for tickets at $60 using Stubhub.com ticket search tool. In previous years, you’d probably only get back results for a few tickets in the nose bleed section with a $60 max, but not with our 18-33 starless Lakers.

The results are staggering; tickets in the lower levels with a great vantage point and premium sections of Staples Center are plentiful.

Exactly half of the Premier sections have seats available for under $60.00. There are even seats in a Suite for $44 each.

If you feel that these seats are still out of your price range and are okay with any seats in the house, you can purchase seats for under $20 which is comparable to the ticket prices in the reserve section at Dodger Stadium.

In my case, I am a little bit of a seat snob so I’m going for the VIP experience. My focus is on the Premier section, the absolute best value at Staples Center for a Lakers’ game (I’ll explain why that is later.) I decide on a pair of Premier seats in Section 10, row 8 for $40.50 per ticket that includes parking. The seats are at an angle of the court and facing the Lakers and Jazz bench.

So that you understand the value of these particular seats, I’ll use Ticketmaster to view the retail price for seats in the same section and row.

I would have spent $160.00 plus Ticketmaster’s fees for the exact same seats that I purchased on Stubhub for $40.50 and it would not have included parking; that is 75 percent savings for the ticket itself and well over an 80 percent discount figuring in parking and said fees.

On my way in to the game I ran across one of the parking structures that are within a reasonable distance to the arena and took note of the price, $20.00. That is about average for decent parking and you should expect to pay from $15 to $25 if you dont get an all incluseive deal as I did for last night’s game. You can find parking that is less expensive, usually in the $5-$15 dollar range, but you’ll have to walk a lot farther and the surrounding streets around Staples aren’t exactly the safest.

The reason why I opt for Premier seats at Lakers game is because there are a few benefits that are exclusive to this section (and Suite ticket holders.). While most fans will enter through the much longer lines of the general entrance, Premier tickets provide an entrance through 1 of the 2 VIP entrances at Staples. This will get you in the arena much quicker and it makes you feel special to have an exclusive entrance.

Once inside I make my way to the concession stand where I purchase the prerequisite meal to any sporting event, a hot dog and a beer.

Unfortunately, this is where it gets pricey and I don’t have any tips here on avoiding this expense other than not drinking or eating at the arena, but what fun is that.

I went with the additional expense of a premium beer so the price is a little higher than had I gone with your basic domestic. In total, the price for my share of the bill for a beer and dog is $17.75.

I get to my seats and this is the view that I have for the game.

The other benefits to seats in the Premier section is in-seat service and more leg and hip room in the seats.

Premier Seats get service at your seat. (Photo: Raining3s.com) 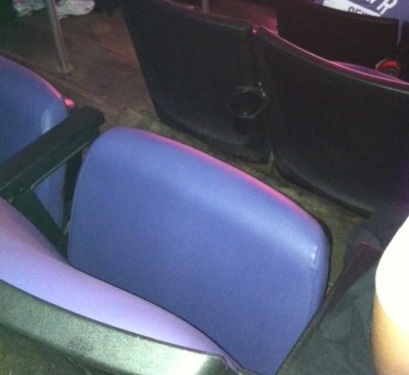 The high of attending a Lakers game at an incredible value faded a bit after the 1st quarter when the Lakers were outscored 77 to 52 to close out the game by the Jazz, who ended up winning 96-79. Still, it I had an amazing time, was surrounded by great fans that still have hope for the Lakers (just not this year) and as always, the atmosphere at Staples Center for a Lakers game was unbelievable. I spent a total of $58.25 for an experience that prior to this season would have cost at minimum $197.75. At the end of this night, while the Lakers might have lost, the regular everyday working man Lakers’ fan won. It’s about time.