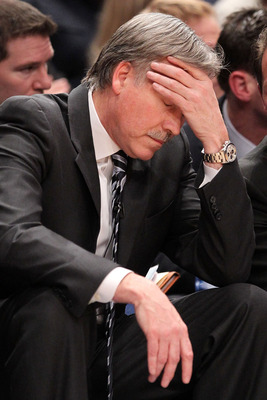 To say the Lakers are off to a disappointing start is an enormous understatement. After acquiring the best center on the planet Dwight Howard and one of the best point guards in the league in Stave Nash, the expectations rose to championship or bust levels. So far this year, its been a big bust.

On the positive side it is still early in the season for the Lakers to turn things around. So far the NBA season is only a quarter of the way through and the Lakers are about to be at full strength with the expected return of Steve Nash.

The negative thought now is if the Lakers have fallen too far behind to get a favorable position in the playoffs or even make the playoffs at all.

These are the current Western Conference standings (1-12 only) as of today and the teams projected win total over the course of an 82 game season: 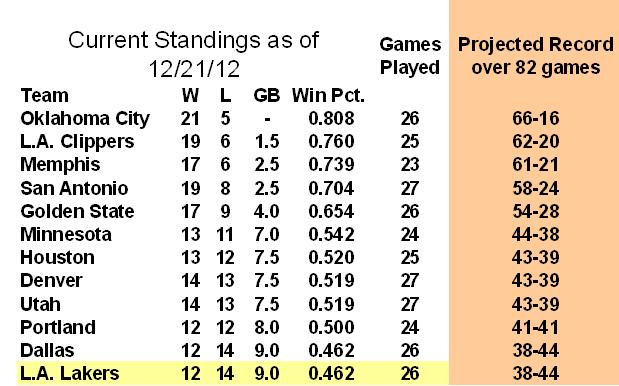 As you can see there are a lot of teams competing for playoff spots this year and a few teams at the top that are projecting to surpass the 60 win mark.

The Lakers have 56 games remaining in the season. We have calculated the necessary record that the Lakers will need to accomplish in order to reach each of the available 8 seeds in the playoffs based on the projections above.

Based on the projections you can pretty much scratch off the top 3 seeds as being realistically attainable for the Lakers this season.

Even getting home court advantage by obtaining one of the top 4 seeds will be very difficult as the Lakers will need to finish by winning more than 82% of their remaining games which would be better than any team’s current winning percentage.

The Lakers have dug themselves quite a big hole and their tall task of getting themselves out begins Saturday at GoldenState where the Warriors are 7-3 this season.