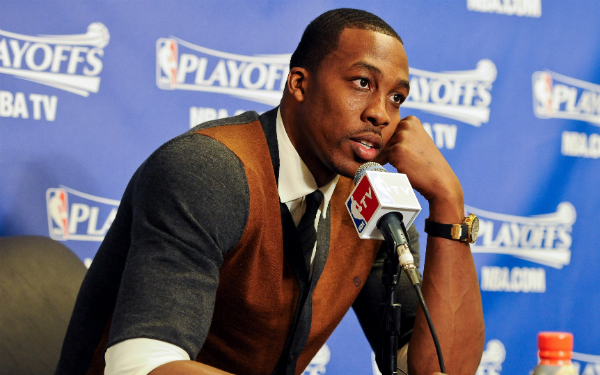 In Dwight Howard’ first interview since the ousting of the Los Angeles Lakers by the San Antonio Spurs in the first round of the playoffs he provides cryptic messages that give off a vibe that he is leaning towards leaving Los Angeles. While it was nothing explicated in what Howard stated in his interview with Los Angeles Times columnist T.J. Simers, you can pick up a hint of his current mindset.

Simers, the master rib jabber, prodded him early with on with mentioning potential landing spots for Howard, like Houston and Atlanta, but Howard didn’t bite with a response.

Simers asked about why he hasn’t provided the Lakers a commitment to playing here next season.

Howard responded, “It’s free agency and I have the opportunity to choose where I’m going to play,”

Simers mentioned the advantages that Los Angeles has in regards to the opportunities available outside of basketball such as in the entertainment field, which is rumored to be of great interest of Howard.

“I’ll get those opportunities later; it’s all about winning now,” Howard responded.

The most telling response of the questions posed to Howard was when he was asked about his opinion of coach Mike D’Antoni.

Simers followed it up with the question, “Is he a great coach?”

“He’s a great person and I’m glad we had the opportunity to be together,” Howard stated.

In this line of questioning, Howard could have simply agreed that he was great, or downgraded him to good, or some other response to give some praise to D’Antoni to be polite, but instead he decided to not answer the question all together. He also could have ended his comment at “He’s a great person”; instead, he felt the need to add the past tense statement of, “I’m glad we had the opportunity to be together.”

In a piece for Lakeshowlife.com I wrote how the Lakers can not afford to lose Dwight Howard for nothing in return. If the Lakers brass, Mitch Kupchak and Jim Buss, get the first inkling that Howard is ready to bail, they need to start discussions with team Howard and NBA teams to get something in return in the form of a sign and trade.

There are 37 days and counting till July 10th which is when Howard can officially sign a new contract with an NBA team.

After the first interview of Howard it is pretty evident that these are going to be 37 long and stressful days for the Lakers front office with the Lakers future hanging in the balance.