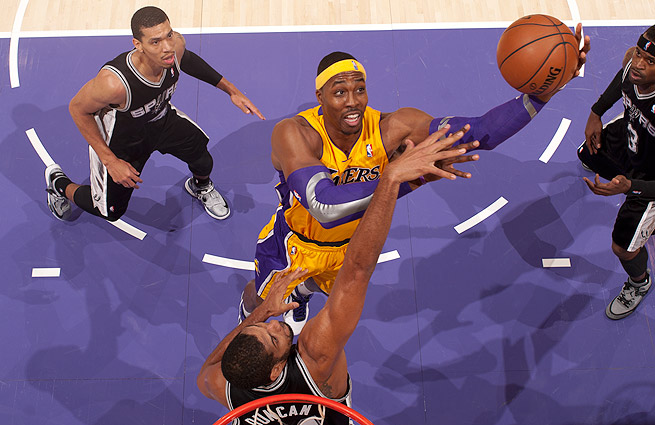 The Los Angeles Lakers first round series versus the San Antonio Spurs continues tonight in Los Angeles. The Lakers are decimated by injuries in their back  court. Steve Blake has been ruled out of tonight’s game and both Steve Nash and Jodie Meeks are doubtful. The Spurs have already made it tough for the Lakers to dominate the inside with their bigs and now with them being limited in the back court offensively, look for the Spurs to put even more pressure on both Pau Gasol and Dwight Howard.

Three things to look for in tonight’s Game 3 from the Lakers:

Who dresses for the Lakers back court:

The Lakers are going to be without Steve Blake and likely not have Steve Nash or Jodie Meeks for tonight’s game; that leaves an available back court pool of Chris Duhon, Darius Morris, Andrew Goudelock and Devin Ebanks who was inactive in the first 2 games of the series. This could be that shot in the arm that the Lakers offense needs to open up things for the bigs down low. Andrew Goudelock is a hit or miss offensive weapon and Chris Duhon has made a career of hitting three point shots on certain occasions. If everything aligns just right for the Lakers, tonight could be the night that Duhon and Goudelock are on offensively. If not, it will be a long night for the Lakers.

The Lakers are +4 on the boards in the series over the Spurs. With all of the other advantages that the Spurs have over the Lakers this is the only area that the Lakers can truly dominate and have yet to do so in the series. After combining for 31 rebounds in game 1, Pau and Dwight were less than stellar in game 2, grabbing only 9 boards a piece. If the Lakers have any shot at taking a game in this series Pau and Dwight need to repeat their game 1 performance and limit the Spurs very efficient offense to one possession. They must also create additional possessions on the offensive end by grabbing those offensive boards. Pau and Dwight are more than capable of dominating the glass in this series against the Spurs and need to do so.

If in fact Steve Nash and Steve Blake cannot go, it will place the inexperienced Darius Morris or rusty Chris Duhan leading the Lakers offense from the point. That is a very scary proposition for the Lakers whose old legs are incapable of getting back to guard in transition, which will be frequent if the lead guards turn the ball over tonight. The Lakers did a good job of limiting their turnovers to 13 in game 2 but that was with Nash and Blake still handling the ball for most of the game. If the Lakers can keep the turnovers in the low teens again that should keep them in the game.