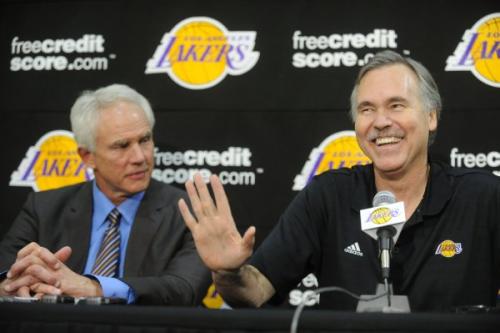 In order for marriages to work it requires that both sides put in an effort to make it work. If the effort is one-sided the party that is putting in all the work will eventually grow tired of the other side’s indifference and give up; soon divorce follows.

When the Los Angeles Lakers decided to sign Mike D’Antoni as their coach they married their franchise to Mike D’Antoni and all that he brings: his philosophy, personality and system. Mike D’Antoni is currently doing what he has always done as a head coach and what should have been expected by the Lakers front office when making their decision to sign him for the next four years.

Mike D’Antoni was immensely successful in his 5 years with the Phoenix Suns where he utilized his run and gun offense with Steve Nash leading the way. He implemented the same system as the New York Knicks head coach and he failed to produce the same results which eventually led to him and the team parting ways last season.

Ideally, you’d like a coach to adjust his style and implement a system that best takes advantage of the skill set of the roster that is intact; especially when that roster has the amount of talent that the Lakers currently possess. The Lakers roster also has 3 of the 5 starters that were part of a recent championship run in 2010; so, there is some evidence here with the Lakers that these guys, when put in the right system and around the right mix of supporting players, can result in achieving the ultimate goal of winning an NBA championship.

While it might not be apparent by looking at the Lakers current record of 15-19, their roster is stacked with elite NBA level talent.

Kobe Bryant is still an elite offensive weapon and the best 2 guard in the game today.

Dwight Howard, while still not 100%, is the best center and defensive big man in the game.

Steve Nash is a top 10 point guard that can still light it up from the outside and create plays for others as good as any guard in the league.

Pau Gasol still possesses the most all around skill for a big man in the game when used properly.

Metta World Peace is in shape, motivated and still a superior defender at the small forward position. He has shown this year to still be a more than adequate offensive weapon and has regained his shooting touch from distance.

Jordan Hill is the perfect role player to surround super stars with his blue collar approach to the game. He rebounds, he hustles and he manufactures points off of his energy on the court.

That talent is on this current Lakers squad so that is not the issue with the Lakers struggles this season.

Again, you’d like your head coach to adjust his style and implement a system that suits the roster best. If we know Mike D’Antoni’s history we know that is not going to happen. It’s not happening now as the Lakers continue to play at a fast pace, rarely go inside to take advantage of their size and jack up 3s like at an alarming rate. The Lakers are currently 3rd in the NBA in 3 point field goals attempted per game at 25.1 per game.

So now what? The Lakers aren’t going to fire Mike D’Antoni. They cant, they just committed to 4 years of him leading this Lakers team after just firing their last head coach after only 1 full season.

Mike D’Antoni is not going to completely change his style of play to suit the players that are on the roster. He only knows how to play one way and that’s fast and loose. You’ll continue to see more of the same, minimal post play and constant launching of shots from distance.

In marriage counseling, when both sides are at odds on a particular part of the marriage, they ask for a medium, a concession from both.

The Lakers need to begin moving players on this team in order to acquire other players that are better suited to running a Mike D’Antoni’s system. The players that the Lakers will acquire will have to have most of the abilities that are ideal in his system: ability to run, disrupt on the defensive end to create steals and fast break opportunities, shoot and play with high energy.

The untouchables on the team, for a variety of reasons, are Kobe, Dwight and Steve Nash. Everybody else on the roster should be available.

The player most likely to be traded is Pau Gasol; mainly because he has the most value, but, also because he just doesn’t fit in this system. A run and gun offense can’t accommodate to big lumbering 7 footers.

Mike D’Antoni concession will then be to utilize his star big man more often. He can continue to run the same type of offense with simply making a concentrated effort throughout the game to get Dwight Howard involved. There are plenty of opportunities throughout the course of any game where the action slows down and the ball can be either feed to the post or pick and rolls with Dwight can be run. The goal should be to increase Dwight’s touches throughout the game. I am not talking about a significant increase, just a modest one to get Dwight more engaged in the game.

In a Marriage, both sides have to be committed to making it work. The Lakers have always been about championships and anything less is considered a failure. The Lakers desperately want to make this work.

Mike D’Antoni is coming off failure in New York and this might be his last chance to prove himself as the offensive genius and an elite head coach that he is tentatively considered to be. He needs this to work.

So we now have the formula to turning around a troubled marriage into a harmonious and healthy one in place. Now we just need both sides to start doing their part on making this work.